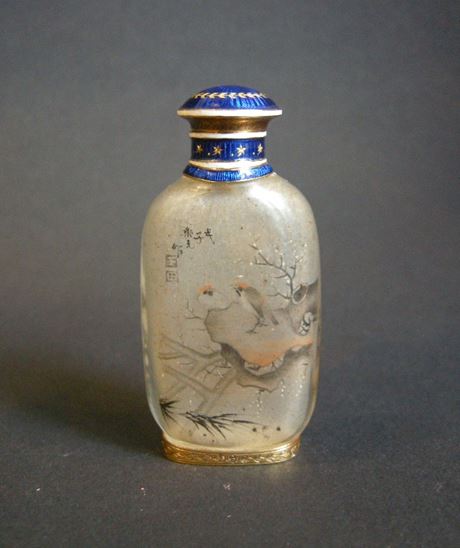 Most of inside painted snuff bottles weren’t made to contain tobacco.
The first recorded inside painted snuff bottles are from the late 18th century. Indeed, we can read in the auction catalogue of the Bertin sale found by Clément Blanc et Laurence Blanc Werlé that Louis the sixteenth minister that collected Asian art, owned an inside painted cristal bottle.
The early school
The first known inside painted snuff bottles are dating from 1800-1805, the beginning of the early school. These first bottles are cristal ones, sometimes faceted and painted with black ink. The master of this school is Yiru Jushi that began to paint around 1805 on 18th century bottles. The quality of the painting isn’t very high but the calligraphy is very nice and we can understand that scholars made these snuff bottles, not always signed, attributed to the Lingnan school. Gan Xuanwen is another painter of this school that signed his bottles and made paintings with few colors and calligraphies.
The snuff bottles of this school, made to contain tobacco, are rare and expansive. They were probably intended for the intellectual elite.
The middle school
A lot of artists belong to this school and characterized by high quality much colored paintings.
The artists are real painters and the calligraphies are perfectly executed. Imperial patronage allow painters to benefit from decent wages. Some scholars, seals carvers became inside snuff bottles painters. We think that these artists could paint themselves for ten to fifteen years maximum and managed afterwards a workshop. The first famous painter of this school is Zhou Leyuan that painted from 1880-1881 onwards. This is the precursor of this new Beijing School. He paints in the Chinese traditional style and his calligraphies are natural and typical.
Afterwards, numerous painters copied him and signed from his name but the quality never equaled his skill and his way of writing.
From this period onwards, bottles are signed by the artist name or name and first name. They bear a date, the year and sometimes the month and the place. Some well-known artists in tribute to Zhou Leyuan signed snuff bottles of his name but put their personal seal not to create misunderstanding. Indeed each painter put his personal red seal on his bottles that allow us to know who really painted one bottle.
Ding Erzhong (1865-1935) inside painted snuff bottles are rare and expansive. His paintings and calligraphies reached a very high quality. He was a scholar and known for his seal carvings. Zhou Leyuan was probably his teacher.
Ye Zhongsan, who painted from 1892 onwards, was another Zhou Leyuan pupil but his painting was more colorful and he was inspired by Chinese literature.
He founded a real dysnasty of snuff bottles inside painters, with his sons and his workshop called “Apricot grove Studio” until the 1940’. The famous Ye Benqi continued his work and in the 1970’, Ye Zhongsan granddaughter, Ye Shuyin, one of the first woman inside painter, who worked during the Cultural Revolution.
Yan Yutian is another Zhou Leyuan pupil and his works are not expansive in comparison with his great skill. Most of his works are dated from 1895. A few bottles are dated 1888 and signed Zhou Leyuan in tribute to his master, but with Yan Yutian seal. His way of painting is really recognizable.
Ma Shaoxuan (1867-1939) begins to paint from 1892 onwards and became painter of the Imperial court from 1904. He represented the great political and military figures. His calligraphies are of very high quality. We can often see on his bottles the subject on one side and calligraphies from ancient texts on the other side. In the second part of his career, Ma Shaoxuan probably founded a workshop with which he painted until 1932.
Other interesting painters but less famous, worked during this middle period: Bi Rongjiu, Zhang Baotian, Zi Yizi, Sun Xingwu, Meng Zishou, Shou Tian, Zhou Shaoyuan, Shou Leyuan nephew…

The modern period: from the 1950/1960’
Wang Xisan is the great painter of this period, the father of the modern period painters.
His style is really personal. He’s still alive but doesn’t paint anymore inside snuff bottles. He painted between the 1960’ and the early 1970’. His most famous pupils are Ye Shuyin, Liu Shouben and Ding Guiling. Wang Xisan paintings are among the most expansive of the inside paintings of all the periods.
From the 1990’/2000’, a new school was born with very talented painters that have important skill. These painters begin to be known and their prices increased. We like very much a very interesting painter called Su Fengyi who works from the 2000’ onwards.
Collectors have to be prudent because copies exist of great inside painters and be careful to painters for tourists either.
Technique
As formerly said, this painting is made inside glass, crystal, agate and very seldom amber bottles.
The painter works first on the inside of the bottle that must become porous in a way that the painting stick to the bottle. Sometimes glue is added to painting. The artist seated to his working table and painted with a curved brush or a bamboo “feather”.
Snuff bottles Agate and Jade soon