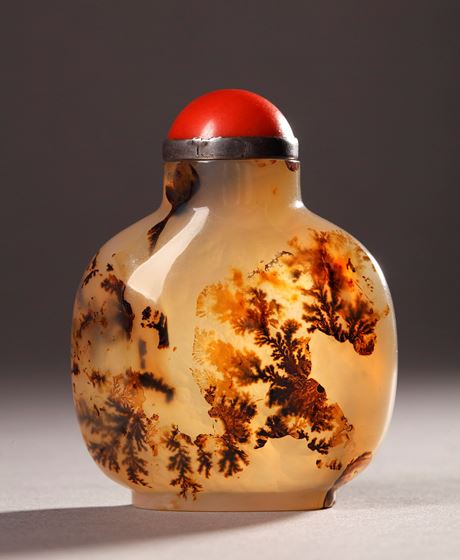 AGATE Snuff Bottles It is about a shape of quartz which we extract in China but which can be also imported, generally of beige color but the cornelian which is of the same family vary some red in the yellow. How is it carved? Paradoxically, the hardness of the agate exceeds that of the jadeite and nephrite but its structure is such as we can carve it better than jadeite. We use abrasives as the diamond dust or instruments made with diamonds cutting. We know Chinese items in agate dating from the 1st century before Christ. Indeed, agate snuff bottles symbolizes the alliance of the man, the material and the spirit. The artist is sensible to intervene on the material only to interpret it and give it the final touch. The stone can be thus used for its natural aspect without any human intervention otherwise the hollowing, source of nuances and transparency. The perfect hollowing is rather reserved for old and imperial items and a more irregular hollowing for later items but it is not an absolute rule because we can find magnificent hollowing later in the XIXth century. From 1900’s, agate snuff bottles said " of collectors " richly sculptured, must not really hollowed because not intended to package tobacco. Concerning the hollowing, the risk by approaching the outside wall was to create weaknesses. The datings often extend over hundred years: on 1750 to 1850 because the same tools were used over a long period. Estimated presents, the Emperor offers them to the officials or to the victorious servicemen. Natural decoration: -ribonned: natural decoration made of horizontal white strips. -zoned: natural effect of concentric circles. - "Macaroni": natural effect of white tasks. -dentritic: natural decoration looking like fossil vegetables; they are often very well hollowed so that the light highlights the decoration at best. - "Peanut": the rather opaque body is carved with fine striation and the yellow inclusions are carved in the shape of peanuts Agate snuff bottles containing inclusions or impurities used to create the decoration are particularly appreciated. Sometimes, these tasks are not or little retouched and have naturally forms of characters or animals; we call these snuff bottles, "inkplay" agate. Executed for the greater part in the workshops of the Official School, their seemingly simple decorations, hide in fact in the form of rebus or of homophones, wishes of promotion, success or longevity. This very important school will excel at other types of decorations so complex, in reliefs close to the technique of the cameo but always playing beautiful transparencies. The decoration is carved in relief in a vein generally of different color. The Suzhou school Suzhou, which was the largest hard stone carving center in China, enjoyed a heyday of 1770-1880. The hollowing in this school is worse than that of the parts of the Official School but where you use all the colors of agate in its depth to get a very detailed decoration. The rocks are carved dotted. There is an alternation of flat surfaces and other highly worked. The foot is carved hollow and the neck diameter is relatively large. The bottles are rather small, ovoid and that is essentially the lower part is carved. The school of Zhiting named after a famous sculptor who first worked in Suzhou in the seventeenth century and is therefore in line with the workshops of Suzhou. Of all the materials used in the manufacture of snuff in China, agate is the one offered by nature, the more artistic possibilities and intellectual speculation. Long misjudged because poorly understood, it is finally now appreciated at its true value.