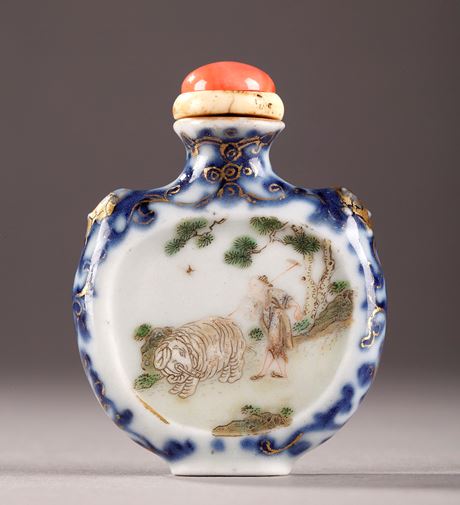 The history of the Chinese snuff bottles begins in the second part of the seventeenth century but most of porcelain snuff bottles were produced from 1770, except some Imperial orders or medicine bottles transformed into snuff bottles. From this period until the end of Qianlong reign (1795) and even until Qianlong death (1799), porcelain snuff bottles can wear the Qianlong Emperor reign mark.These eighteenth century snuff bottles made for the elite were quite small or medium and of nice quality.
From the late eighteenth century the moulded porcelain snuff bottles became very fashionable, particularly under Jiaqing reign (1796-1820) and they often wear this Emperor reign mark.
Under Daoguang reign (1821-1850), new shapes and decorations appreciated by the Emperor and Empress appeared, the bottles are usually bigger and more rectangular. Most of them that were made for the Palace wear the Daoguang seal script iron red reign mark.
Under Xianfeng (1851-1861) and Tongzhi (1862-1874) reigns, snuff bottles become very popular and the quality is usually lower except for the bottles ordered by these Emperors. The Guangxu reign (1875-1908) and the Republic see gradually the end of snuffing as the new craze for cigarettes increase from 1920.
The different techniques used for porcelain are used to produce snuff bottles either: decorations can be made with overglaze enamels or on the contrary with underglaze copper red or cobalt blue. This technique was very difficult to succeed because the red often becomes grey or green during firing and the blue insipid. We have imitations of the materials,gold,lacquer cinnabar,turquoise,bronze,overlay glass....
Porcelain snuff bottles can be made with “soft paste” that is like hard paste but with steatite inside kaolin and the firing is lower. “Soft paste” snuff bottles are usually made with great skill because the best workers were employed to realize them.
Shapes are very varied but must always be ergonomic (pleasant in the hand):Figures animals, fruits, different vases. Decoration is made of symbols from ancient Chinese literature. They were made by Imperial workshops or anonymous ones in the kilns of Jingdezhen. Only few bottles of the late nineteenth or early twentieth century wear a signature from private workshops (for instance: Wang Bingrong).
(next time the glass snuff bottles)